Professor Rohinton Kapadia died on Sunday 11 January 2015. I owe this information to Ranjan Roy, my fellow student, who posted it on Facebook. Kapadia was suffering from cancer and must have been in his late seventies. His age is an educated guess. To me, this man who taught our class English Literature from 1972-1975 in the hallowed classrooms of St.Xavier’s College on Park Street in Calcutta, shall remain forever young in my memory.

The first thought that came to my mind during his introductory lecture was – “This guy looks too young to be a professor!” I soon found out that youth was no barrier to his incredible drive and enthusiasm as he plunged our young Indian minds into the epic battles of Beowulf in a land far removed from the fertile plains of Bengal. With his vivid imagination and choice of words, the over 3000 alliterative lines of Old English came to life and I could visualize the mythical landscape where the hero Beowulf battled the monster Grendel in the land of the Norsemen. Since that first contact, Professor Kapadia remained forever associated with Beowulf in my mind.

He was a friendly person, armed with an amiable smile. I found it extremely easy to approach him when I was struggling with my assignments. The three years spent in his company certainly moulded my taste in prose and poetry and even though my working life took me far away from the groves and relevance of academia, I would like to think that my sensibilities had been honed by exposure to the aesthetics of the written word analyzed and dissected in the Kapadia classroom.

He would stride along the aisles between the old wooden desks reading a few lines, then stop abruptly and hurl a question at us. Our class size was fairly small and we would spread ourselves around. He would weave in and out between the spaces, head back to the blackboard and scribble the keywords that we must grasp. Discussion followed. Not once did he berate us for our ignorance or lack of diligence. My classmates will agree with me that he was the only professor whose lectures we did not sleep through!

More than a teacher, he was a friend and guide. He would go out of his way when the situation demanded. A case in point: at the end of two years, the results of the B.A. Part I examination was declared by the University of Calcutta. But my mark sheet failed to arrive at our college. Professor Kapadia volunteered to go with me to the College Street building where these things were handled.

After negotiating a series of interminable desks with seemingly clueless clerks behind them, we were led into a dimly lit room with cobwebs dangling from the high ceiling, catching the faint light in gossamer threads. There were mark sheets lying scattered on the floor. Kapadia and I went down on our knees and began to carefully sift through pages and pages of paper with strange, unfamiliar names on them. It was nothing short of a miracle when I found my name. We both shouted out in relief and excitement and the cobwebs trembled…

He sympathized with me when after graduation I was struggling to find work. I remember one afternoon when he told me, “Aloke, let’s go have a drink! Let’s talk things over.” We walked into a cafe on Park Street. He ordered a couple of beers and listened to my woes as I unburdened my soul in between sips of the cold libation. We conversed like two equals and he gave me some practical advice regarding a job that would have taken me to the remotest corners of Bhutan on a paltry salary. I realized that in spite of being an incurable romantic at heart, Kapadia’s character was also rooted in pragmatism, thanks to his Parsi character! I listened and did not go.

Instead, I moved out of Calcutta and headed west to Bombay where I would spend the next 28 years of my life. We corresponded briefly for some time and I remember him writing to say that the college, an exclusive male preserve since its inception, was now accepting female students in the English Literature course. He sounded quite thrilled and I am sure that he was extremely popular with the ladies who might have found his intense character quite attractive. Regrettably, I lost touch with him thereafter and it is totally my fault.

The fact that I always instinctively key in “Kapadia” in response to the password recovery hint question “Who was your favourite teacher?” on many websites is a clue to how indelible an impression he has left on me. Quite simply, no one else comes to mind.

One of the poems that we studied in his class was Sea Fever by John Masefield and through the decades that I have abandoned the reading of verse, these lines have always resonated in my head at odd moments. They constitute the perfect epitaph for him:

“I must go down to the seas again, to the vagrant gypsy life,
To the gull’s way and the whale’s way where the wind’s like a whetted knife;
And all I ask is a merry yarn from a laughing fellow-rover,
And quiet sleep and a sweet dream when the long trick’s over.”

It is only appropriate that the creators of Beowulf should have the last word. The concluding lines of the epic best describes how I remember Professor Kapadia :

“Gentlest of men, most winning of manner,
Friendliest to folk-troops and fondest of honor” 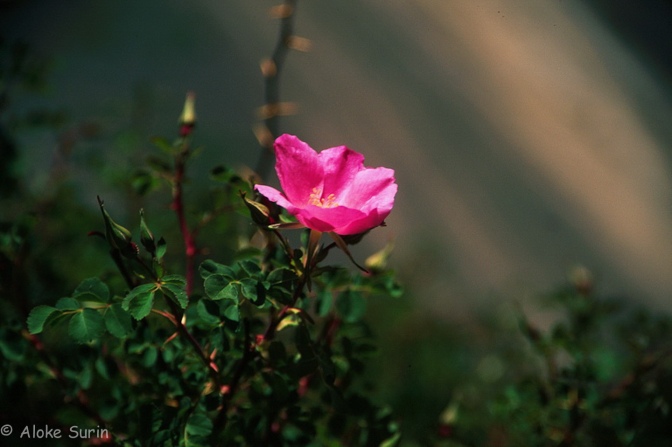 Blundering through life....... View all posts by alokesurin